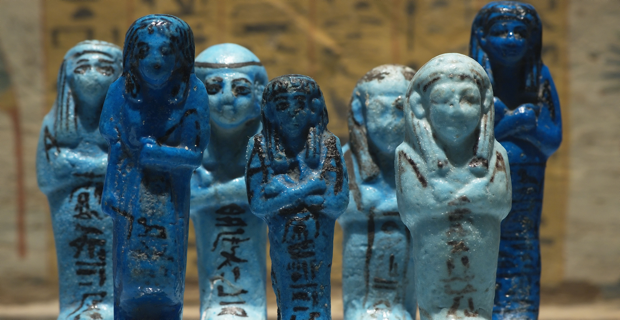 The first mass produced pieces of artwork were the ancient Egyptians shabtis which were essentially miniature mummies that the ancient Egyptians believed had magical powers and were therefore buried with the dead. Shabtis were comprised of Egyptian faience which is a type of glass ceramic material made from sand. Egyptian faience is referred to as such in order to distinguish it from faience, which is a tin glazed pottery associated with Faenza, Italy. The idea of Egyptian faience was to replicate semiprecious stones like turquoise lapis lazuli from Afghanistan, which at the time was more expensive than gold. The recipe for Egyptian faience is 90% crushed silica, crushed fine natron salt to act as a flux, crushed limestone, and then the coloring with blue being the most popular, a color achieved through the use of pure copper oxide. Water was introduced to turn this composition from a granular mix into a dough like substance. Natron salt which is a type of baking soda, is the key ingredient to this recipe as it rises to the surface when baked and lowers the overall temperature at which sand melts and becomes glass. The statues are left to stand for 24 or more hours as this helps the salt grow on the surface through a chemical reaction process as oxygen within the ambient environment mixes with the ingredients inside the Egyptian faience

Damascus, Syria, the birthplace of Damascus steel was prized in the ancient world for its durability but unbeknownst to the craftspeople who forged Damascus steel, the region from which the iron ore was taken had naturally occurring nickel which meant that Damascus metalsmiths had composite steel 3000 years before the rest of the world as the idea to mix different kinds of metals had not yet been invented. Damascus steel was shatter resistant and could be sharpened to become sharper than any other type of steel. Having first encountered it during the Crusades of the 11th century, European forgers attempted for centuries to recreate what their Middle Eastern counterparts had already perfected

Guatemala is believed to be the birthplace of chocolate, worshipped by the ancient Mayans, specifically the cacao tree which was worshipped and revered, calling chocolate the “food of the gods”

Measuring iron in the brain is the best known way to confirm dementia without performing an autopsy after death. The brain naturally creates tiny bits of iron referred to as “magnetite”. As a human being ages, more and more iron accumulates within the brain. Too much iron however, is a hallmark of dementia. It is theorized that this overproduction of iron is actually due to external factors like pollution rather than naturally occurring phenomena. Dr. Barbara Marr, a world renowned expert and authority in respect to the measurement of metal in incredibly small particles, took thin tissue sections of affected brains obtained during autopsy and observed them under a highly resolved transmission electronmicroscope to review the particles within the neurons of the brain and found 2 different shapes of particle. The magnetite particles are beautifully crystalline, regular and geometric, whilst the opposing particles were rounded in shape, referred to as “spherls” or “nanospheres”, rounded in shape because they were originally molten droplets. For every 1 biologically manufactured magnetite, 100 artificially implanted foreign particles of iron are found within the brains of those affected by this condition as confirmed by a study which took place in Mexico City, Mexico. Although not definitely proven, the shape of these secondary particles is remarkably similar to that of airborne pollution, which suggests to scientists that there is a discernible correlation between the 2 types

The human brain has 100,000,000,000,000 (100 trillion) connections and 86,000,000,000 (86 billion) neurons, which is more connections and neurons than there are stars in the Milky Way Galaxy. Ironically, the majority of the most successful creatures on Earth do not have a brain; organisms like plants, coral, and jellyfish. The sea squirt is a primary example as it has just 200 neurons, allowing it only to perceive and display simple interaction with the environment by sensing light and moving its flagellum. The sea squirt moves around until it finds a rock, then it dumps its tail and uses those once dedicated neurons for different applications, staying anchored to this spot for the rest of its life. Neurons were originally designed to allow for simple motion and movement, but as evolution progressed steadily, neural networks began to build and design intelligent life which is capable of consciousness and a sense of self but also more abstract concepts like art, mathematics, and science

Cave systems form when acidic water etches its way through rock. Rainwater becomes acidic as it takes in carbon dioxide and groundwater can become acidic due to the acids found in nearby soil. Water causes existing cracks within the rock to widen into passages which the water flows through to create even wider channels. Over time caverns begin to form as the rock weakens and falls