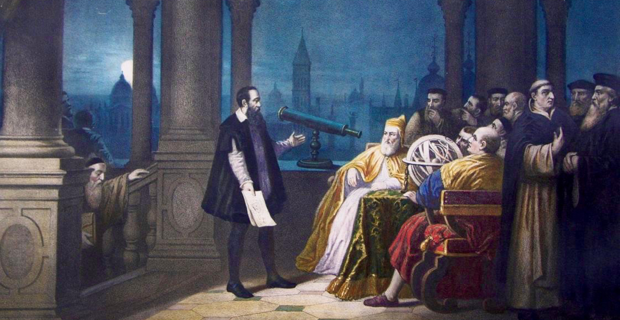 It had been known since the first spectacles were produced in the middle of the 13th century, that glass was capable of bending light, a property which no other known material of the period could achieve. The Dutch spyglass worked upon this very principal, arranging lenses with careful attention to detail to create a compounding magnification effect. If light hits a plano-convex (pronounced “play-noh”) lens, which is flat upon one side and convex upon the other, the same formation used for those who suffer from hyperopia, rays of light streaming inward are bent toward eachother, eventually meeting and converging at a specific triangular point. Right before this focal point, Galilei improved the original Dutch design by placing his second lens, an ocular lens which is plano-concave, meaning flat upon one side and concave upon the other, the same formation used for those who suffer from myopia. This secondary lens pushes the bent rays of converging light back out again so that they can hit the eye and provide a clear image. The eye focuses this light upon the retina so that the observer can view the image produced by the spyglass. The magnification power of a telescope depends upon the ratio between the focal lengths of the lenses, with these distances marked as F1 for the distance between the front of the spyglass and the plano-concave lens, and F2 from the plano-concave lens toward the back of the spyglass. The largest difficulty impeding Galilei was the grinding down process of his convex lens, in an attempt to make it as shallow as possible to maximize the length of the F1 partition, as the longer the distance is, the greater the magnification will be. Within a few weeks of developing this new technology, Galilei’s first telescope had a clear magnification of 8x, far exceeding the power of the original Dutch spyglass. On August 21, 1609, Galilei climbed a Venice bell tower to meet up with Venetian nobles and senators so that he could display his new technology. This new bleeding edge feat of engineering permitted Venetians to spot sailing ships 2 hours earlier than if they had used the naked eye. 3 days after the event, Galilei gifted his telescope to the Duke of Venice and was afforded a guaranteed job for life in exchange, with this salary equating to double his original income. With his finances secured, Galilei went on to develop and produce even more powerful telescopes

Carbonated drinks are in a state of super saturation in respect to how much carbon dioxide they contain. Once a solution has reached complete saturation, it won’t allow any more of whatever substance is saturating it. If salt is added to a glass of water, eventually it will reach a point in which the salt just falls to the bottom rather than being dissolved in the water due to over saturation. If a solution is heated, it will be able to tolerate higher levels of saturation, and if it is cooled it is able to tolerate lesser levels of saturation. Carbonated drinks are water saturated with carbon dioxide, and this carbon dioxide is always looking for a method to escape which is why all carbonated drinks eventually turn flat provided enough time has passed. When sugar is added to a carbonated drink, the sugar nucleates the drink in that it provides a method of escape for the carbon dioxide present. Sugar, Mentos, and other various substances have a large surface area which allows a lot of carbon dioxide to become attached to it resulting in a rapid escape

Kolkatan sewers were once the envy of the world, built during the Victorian era and spanning 90 kilometers below the city. Because the Kolkatan sewer system is now 130 years old, it no longer functions as it should, especially when accounting for the increasingly large modern day population of Calcutta, India. Due to this, teams of workers with buckets enter the sewers every night all over Calcutta to shovel and remove excrement so that blockages don’t occur. Workers typically work 11:00 PM – 5:00 AM because this is when the least amount of people are awake to use the bathroom. The problem is becoming increasingly worse as time progresses, being that more and more people are now connecting into the central city sewage line as incomes and quality of life increases throughout India